To translate writings, you need a key to the code — and if the last writer of Martian died forty thousand years before the first writer of Earth was born … how could the Martian be translated? 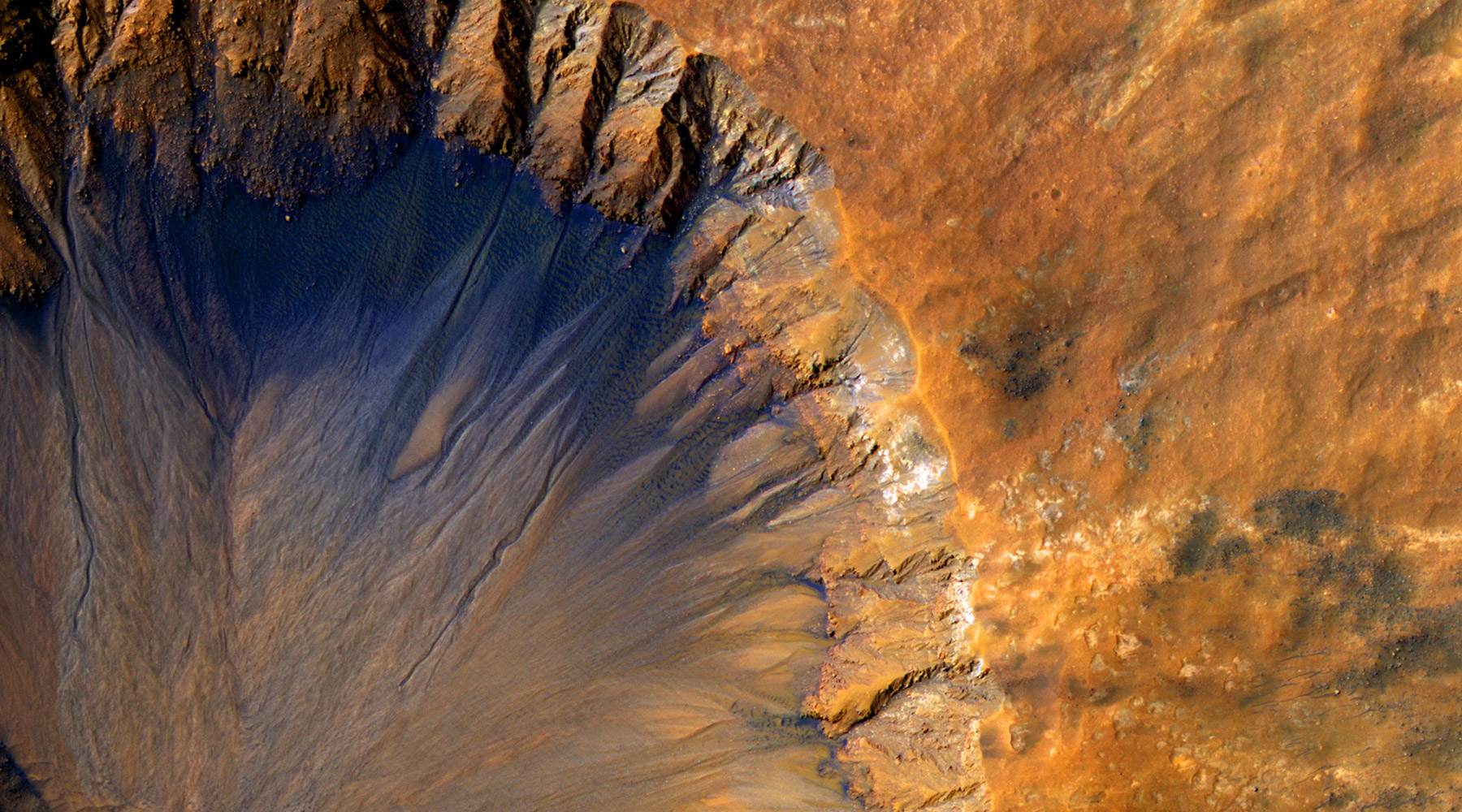 Martha Dane paused, looking up at the purple-tinged copper sky. The wind had shifted since noon, while she had been inside, and the dust storm that was sweeping the high deserts to the east was now blowing out over Syrtis. The sun, magnified by the haze, was a gorgeous magenta ball, as large as the sun of Terra, at which she could look directly. Tonight, some of that dust would come sifting down from the upper atmosphere to add another film to what had been burying the city for the last fifty thousand years.

The red loess lay over everything, covering the streets and the open spaces of park and plaza, hiding the small houses that had been crushed and pressed flat under it and the rubble that had come down from the tall buildings when roofs had caved in and walls had toppled outward. Here, where she stood, the ancient streets were a hundred to a hundred and fifty feet below the surface; the breach they had made in the wall of the building behind her had opened into the sixth story. She could look down on the cluster of prefabricated huts and sheds, on the brush-grown flat that had been the waterfront when this place had been a seaport on the ocean that was now Syrtis Depression; already, the bright metal was thinly coated with red dust. She thought, again, of what clearing this city would mean, in terms of time and labor, of people and supplies and equipment brought across fifty million miles of space. They’d have to use machinery; there was no other way it could be done. Bulldozers and power shovels and draglines; they were fast, but they were rough and indiscriminate. She remembered the digs around Harappa and Mohenjo-Daro, in the Indus Valley, and the careful, patient native laborers—the painstaking foremen, the pickmen and spademen, the long files of basketmen carrying away the earth. Slow and primitive as the civilization whose ruins they were uncovering, yes, but she could count on the fingers of one hand the times one of her pickmen had damaged a valuable object in the ground. If it hadn’t been for the underpaid and uncomplaining native laborer, archaeology would still be back where Wincklemann had found it. But on Mars there was no native labor; the last Martian had died five hundred centuries ago.

Something started banging like a machine gun, four or five hundred yards to her left. A solenoid jack-hammer; Tony Lattimer must have decided which building he wanted to break into next. She became conscious, then, of the awkward weight of her equipment, and began redistributing it, shifting the straps of her oxy-tank pack, slinging the camera from one shoulder and the board and drafting tools from the other, gathering the notebooks and sketchbooks under her left arm. She started walking down the road, over hillocks of buried rubble, around snags of wall jutting up out of the loess, past buildings still standing, some of them already breached and explored, and across the brush-grown flat to the huts.

There were ten people in the main office room of Hut One when she entered. As soon as she had disposed of her oxygen equipment, she lit a cigarette, her first since noon, then looked from one to another of them. Old Selim von Ohlmhorst, the Turco-German, one of her two fellow archaeologists, sitting at the end of the long table against the farther wall, smoking his big curved pipe and going through a looseleaf notebook. The girl ordnance officer, Sachiko Koremitsu, between two droplights at the other end of the table, her head bent over her work. Colonel Hubert Penrose, the Space Force CO, and Captain Field, the intelligence officer, listening to the report of one of the airdyne pilots, returned from his afternoon survey flight. A couple of girl lieutenants from Signals, going over the script of the evening telecast, to be transmitted to the Cyrano, on orbit five thousand miles off planet and relayed from thence to Terra via Lunar. Sid Chamberlain, the Trans-Space News Service man, was with them. Like Selim and herself, he was a civilian; he was advertising the fact with a white shirt and a sleeveless blue sweater. And Major Lindemann, the engineer officer, and one of his assistants, arguing over some plans on a drafting board. She hoped, drawing a pint of hot water to wash her hands and sponge off her face, that they were doing something about the pipeline.

She started to carry the notebooks and sketchbooks over to where Selim von Ohlmhorst was sitting, and then, as she always did, she turned aside and stopped to watch Sachiko. The Japanese girl was restoring what had been a book, fifty thousand years ago; her eyes were masked by a binocular loup, the black headband invisible against her glossy black hair, and she was picking delicately at the crumbled page with a hair-fine wire set in a handle of copper tubing. Finally, loosening a particle as tiny as a snowflake, she grasped it with tweezers, placed it on the sheet of transparent plastic on which she was reconstructing the page, and set it with a mist of fixative from a little spraygun. It was a sheer joy to watch her; every movement was as graceful and precise as though done to music after being rehearsed a hundred times.

“Hello, Martha. It isn’t cocktail-time yet, is it?” The girl at the table spoke without raising her head, almost without moving her lips, as though she were afraid that the slightest breath would disturb the flaky stuff in front of her.

“No, it’s only fifteen-thirty. I finished my work, over there. I didn’t find any more books, if that’s good news for you.”

Sachiko took off the loup and leaned back in her chair, her palms cupped over her eyes.

“No, I like doing this. I call it micro-jigsaw puzzles. This book, here, really is a mess. Selim found it lying open, with some heavy stuff on top of it; the pages were simply crushed.” She hesitated briefly. “If only it would mean something, after I did it.”

There could be a faintly critical overtone to that. As she replied, Martha realized that she was being defensive.

“It will, some day. Look how long it took to read Egyptian hieroglyphics, even after they had the Rosetta Stone.”

Sachiko smiled. “Yes. I know. But they did have the Rosetta Stone.”

“And we don’t. There is no Rosetta Stone, not anywhere on Mars. A whole race, a whole species, died while the first Crò-Magnon cave-artist was daubing pictures of reindeer and bison, and across fifty thousand years and fifty million miles there was no bridge of understanding.

“We’ll find one. There must be something, somewhere, that will give us the meaning of a few words, and we’ll use them to pry meaning out of more words, and so on. We may not live to learn this language, but we’ll make a start, and some day somebody will.”

Sachiko took her hands from her eyes, being careful not to look toward the unshaded light, and smiled again. This time Martha was sure that it was not the Japanese smile of politeness, but the universally human smile of friendship.

“You haven’t found any more pictures?”

Sachiko shook her head. Not that it would have meant much if she had. They had found hundreds of pictures with captions; they had never been able to establish a positive relationship between any pictured object and any printed word. Neither of them said anything more, and after a moment Sachiko replaced the loup and bent her head forward over the book.

The House On The Borderland George Harrison